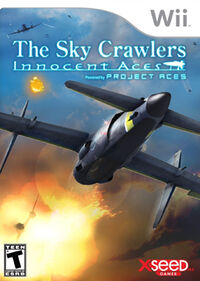 Set in an alternate history, the game follows the journeys and tribulations of a group of young fighter pilots involved in aerial dogfighting using propeller-driven fighter planes. Although the world is at peace, in order to ease the tension of a populace accustomed to war and aggression, private corporations contract fighter pilots to stage combat operations against each other for show. In the game players control Lynx, a rookie pilot who joins a team of privately contracted pilots, the Sky Crawlers. As he tries to gain acceptance in the team, Lynx and the Sky Crawlers also become embroiled in a mystery revolving around the appearance of a group of seemingly immortal fighter pilots. The game is set in a world where war no longer exists. In order to fill this void that’s developed in the human psyche, corporations stage fictional war “shows” on a massive scale. Gamers take on the role of a top ranked pilot that’s been recently transferred into the Rostock corporation. This enterprise of war has mysteriously been recruiting fighter pilots both old and young; with some being mere children. One child, Maumi Orishina stands out from the rest. What is it about this girl?

Players hold the Wii Remote in their left hand and the Nunchuk in their right hand. Using the motion detection of both controllers, movement of the Nunchuk is used to tilt, roll, pitch and yaw the player's aircraft, while the Wii Remote is used as the throttle, with players tilting it up and down to accelerate and decelerate. The game also supports the Classic Controller and GameCube controller for more traditional control. The game introduces a gameplay mechanic called the "Tactical Maneuver Command" system, in which players gain the ability to perform automatic acrobatics to better position themselves for attack by keeping in close proximity to their enemies. During the game players unlock new planes, which they can customize in seven areas, such as color, weapons and armor. Players can also replay previous missions that they have beaten.

A manga series based on the game was serialized in the monthly magazine Monthly Comic Blade from November 2008. It was illustrated by Yūho Ueji.

Retrieved from "https://skycrawlersinnocentaces.fandom.com/wiki/The_Sky_Crawlers:_Innocent_Aces?oldid=4388"
Community content is available under CC-BY-SA unless otherwise noted.